END_OF_DOCUMENT_TOKEN_TO_BE_REPLACED

Chorus
And the glory of the Lord

Recit., Air (Bass)
Thus saith the Lord
But who may abide the day of His coming

Chorus
And He shall purify

Recit., Air (Bass)
For, behold, darkness shall cover the earth
The people that walked in darkness

Chorus
For unto us a child is born

Recit. (Soprano)
There were shepherds abiding in the field
And lo! The angel of the Lord came upon them
And the angel said unto them
And suddenly there was with the angel

Recit. (Alto)
Then shall the eyes of the blind be opened

Air (Alto/Soprano)
He shall feed His flock like a shepherd

Chorus
His yoke is easy, and His burden is light

Chorus
Behold the Lamb of God

Air (Alto)
He was despised

Recit., Air (Tenor)
Thy rebuke hath broken His heart
Behold, and see if there be any sorrow
He was cut off out of the land of the living
But Thou didst not leave His soul in hell

Air (Soprano)
How beautiful are the feet of them

Air (Bass)
Why do the nations so furiously rage

Recit., Air (Tenor)
He that dwelleth in heaven
Thou shalt break them

This article is an edited and abridged version of June 17 weekly ‘New Paradigm for Mankind’ show on LaRouche PAC TV. The speaker/author is Megan Beets. Two days ago Lyndon LaRouche lead a discussion which centered on the following question: Since the collapsing trans-Atlantic system means doom for civilization, where is a future for civilization to come from? We do […]

END_OF_DOCUMENT_TOKEN_TO_BE_REPLACED 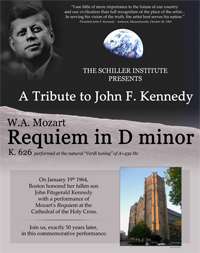 The Schiller Institute Chorus, augmented by additional singers and an orchestra largely comprised of volunteers from the New England Conservatory of Music, presented Mozart’s Requiem in its entirety to an audience of 1,200 at Boston’s Cathedral of the Holy Cross, performed exactly 50 years to the day, of a 1964 Solemn High Requiem Mass specially requested by the Kennedy family.

Sequentia
Day of wrath, that day
Will dissolve the earth in ashes
As David and the Sibyl bear witness.
What dread there will be
When the Judge shall come
To judge all things strictly.
A trumpet, spreading a wondrous sound
Through the graves of all lands,
Will drive mankind before the throne.
Death and Nature shall be astonished
When all creation rises again
To answer to the Judge.
A book, written in, will be brought forth
In which is contained everything that is,
Out of which the world shall be judged.
When therefore the Judge takes His seat
Whatever is hidden will reveal itself.
Nothing will remain unavenged.
What then shall 1 say, wretch that I am,
What advocate entreat to speak for me,
When even the righteous may hardly be secure?
King of awful majesty,
Who freely savest the redeemed,
Save me, O fount of goodness.
Remember, blessed Jesu,
That I am the cause of Thy pilgrimage,
Do not forsake me on that day.
Seeking me Thou didst sit down weary,
Thou didst redeem me, suffering death on the cross.
Let not such toil be in vain.
Just and avenging Judge,
Grant remission
Before the day of reckoning.
I groan like a guilty man.
Guilt reddens my face.
Spare a suppliant, O God.
Thou who didst absolve Mary Magdalene
And didst hearken to the thief,
To me also hast Thou given hope.
My prayers are not worthy,
But Thou in Thy merciful goodness grant
That I burn not in everlasting fire.
Place me among Thy sheep
And separate me from the goats,
Setting me on Thy right hand.
When the accursed have been confounded
And given over to the bitter flames,
Call me with the blessed.
I pray in supplication on my knees.
My heart contrite as the dust,
Safeguard my fate.
Mournful that day
When from the dust shall rise
Guilty man to be judged.
Therefore spare him, O God.
Merciful Jesu,
Lord Grant them rest.

Offertorium
Lord Jesus Christ, King of glory,
deliver the souls of all the faithful
departed from the pains of hell and from the bottomless pit.
Deliver them from the lion's mouth.
Neither let them fall into darkness
nor the black abyss swallow them up.
And let St. Michael, Thy standard-bearer,
lead them into the holy light
which once Thou didst promise
to Abraham and his seed.

We offer unto Thee this sacrifice
of prayer and praise.
Receive it for those souls
whom today we commemorate.
Allow them, O Lord, to cross
from death into the life
which once Thou didst promise to Abraham
and his seed.

Sanctus
Holy, holy, holy,
Lord God of Sabaoth.
Heaven and earth are full of Thy glory.
Hosanna in the highest.

Benedictus
Blessed is He who cometh in the name of the Lord.
Hosanna in the highest.

When I Was Sinkin' Down"

"Joy, beautiful spark of the gods, daughter from Elysium,
we, drunk with fire, step into your holy shrine,"

So starts the German "Poet of Freedom" Friedrich Schiller his hymn to humanity: „Ode to joy“, which Germany's composer Ludwig van Beethoven incorporated in his greatest and last symphony for orchestra and choir.

Both artists were fervent defenders of humanity, Schiller in writings, Beethoven in music, and this 9th symphony of Beethoven has become the international symbol of true freedom: of brotherly ennoblement of the soul, and of the famous unalienable rights of man such as Life, Liberty and the Pursuit of Happiness, as enshrined in the anti-oligarchical Declaration of Independence of the then newly emancipated American colonies from their British oppressors in 1776.

Today, with the sweeping global destructive crisis hitting these artists' homeland Germany once again, their message is needed more than ever to release Germany’s and other countries’ populations from fear, despair, and indifference. It is in such times of existential crisis that people can be organized and inspired around profound and higher ideas to fight to reclaim their humanity, and their assurance of a brighter future for their posterity.

The international youth movement of Lyndon LaRouche is heading this fight, politically, scientifically and culturally, bringing these ideas to the people in the street and to the cowards in power. With the extraordinary music of Beethoven such ideas becomes irresistible to the creative mind, and through the past half year, LaRouche's youth movement in Germany have worked on the last movement of Beethoven's 9th symphony performing it at our political events, to make clear, that it is time, now, for a sweeping international creative renaissance, as if a continuous beautiful work of art, without boundaries.

Joy, beautiful spark of the gods,
daughter from Elysium,
we, drunk with fire, step into
your holy shrine, Heavenly One.
Your magic binds together again
that which custom has rigidly divided:
all human beings become brothers
wherever your gentle wing is.
Be embraced, millions!
This kiss is for the whole world!
Brothers, over the starry canopy
there must be a loving Father dwelling.

Whoever has succeeded in the great attempt
to be a friend to a friend,
whoever has won a dear wife,
may he mix in his rejoicing!
Yes, whoever can call even only one soul
his on the round earth!
And whoever never could, let him leave
secretly, weeping, from this union.
Whatever inhabits the great Circle,
may it honor sympathy!
It [sympathy] leads to the stars,
where the Unknown is enthroned.

All beings drink Joy
at the breast of Nature;
all good [beings], all evil [ones]
follow her rosy trail.
She gave us kisses and grapes,
gave us] a friend, tested by death itself.
Delight was given even to the worm,
and the angel stands before God.
Are you falling down, Millions?
Do you perceive your Creator, World?
Seek him above the starry canopy!
He must be dwelling above the stars ...