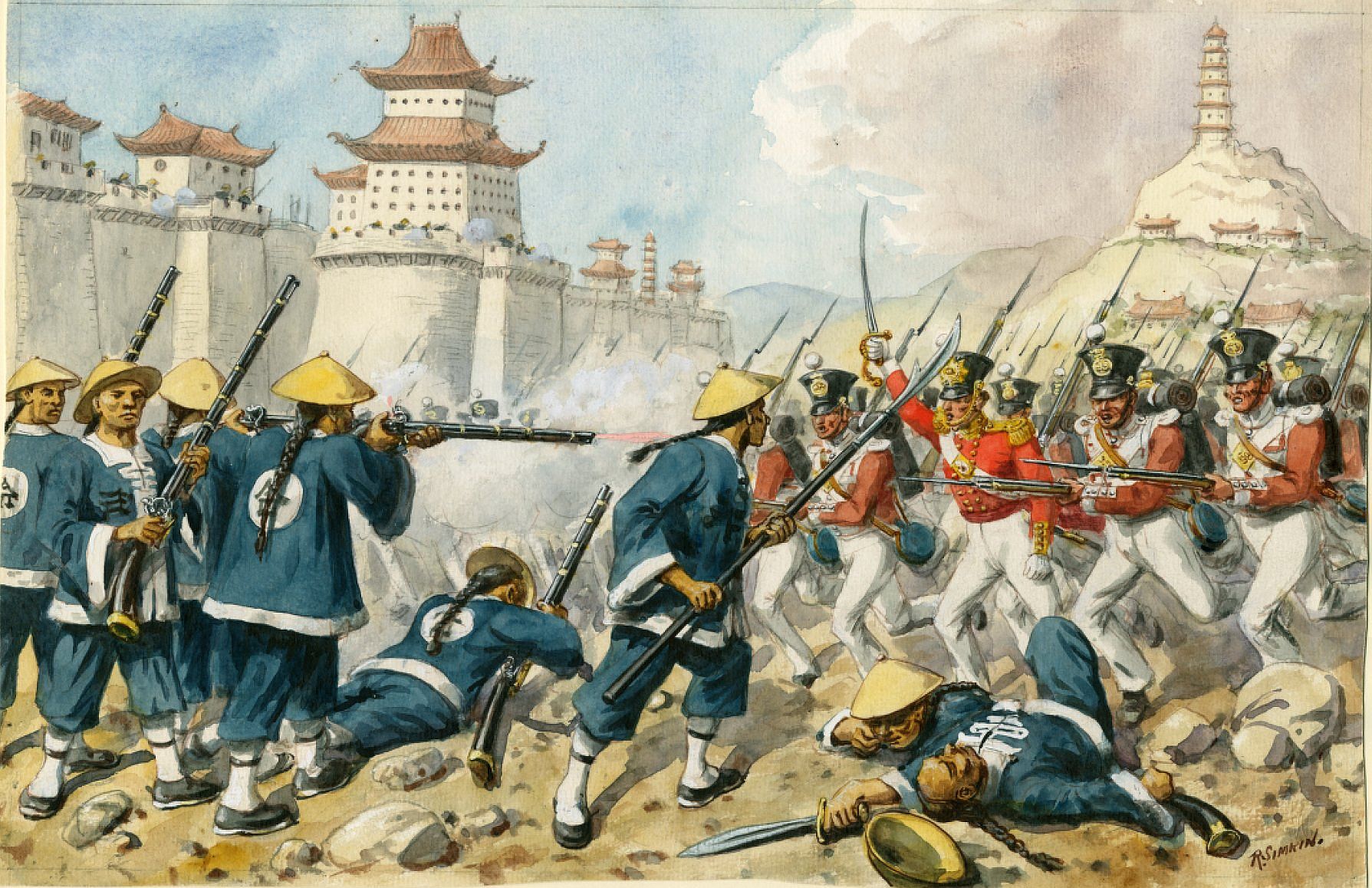 July 23—It should come as no surprise that British banking giant HSBC was caught laundering money for drug cartels and terrorist groups. HSBC, as we shall show, is the kingpin bank of the global drug trade, a bank which, since its founding in 1865, has been devoted to financing drug crops and laundering the proceeds. HSBC is, in fact, one of the key controlling institutions of the global illicit drug cartel we call Dope, Inc.

If you think that is an outlandish claim, consider the fact that EIR, through its book Dope, Inc., and in its affilicated War on Drugs magazine, published in the early 1980s by the National Anti-Drug Coalition, have made this charge for over 30 years, and have never been sued or challenged by the bank.

For years, when banks have been caught laundering drug money, they have claimed that they did not know, that they were but victims of sneaky drug dealers and a few corrupt employees. Nothing could be further from the truth. The truth is that a considerable portion of the global banking system is explicitly dedicated to handling the enormous volume of cash produced daily by dope traffickers. This banking apparatus is essential to the functioning of Dope, Inc.—without it, the drug cartels would quickly choke on their own cash.

Contrary to popular opinion, it is not “demand” from the world’s population which creates the mind destroying drug trade. Rather, it is the world financial oligarchy, looking for massive profits and the destruction of the minds of the population it is determined to dominate, which organized the drug trade. The case of HSBC underscores that point. The banks—not all of them, but most of the big international ones—are an integral part of Dope, Inc. Serving as the central bank of this global apparatus, is HSBC.

The Bank of Opium

HSBC was founded in Hong Kong in 1865 as the Hong Kong and Shanghai Banking Company by a consortium of British opium, silk, and tea-trading companies which themselves were the spawn of the notorious British East India Company. Leading members of the consortium included Jardine Matheson, Dent & Company, David Sassoon & Company, James Innes, and Boston’s Russell & Company. Also supporting the new bank was the Peninsular and Orient Steam Navigation Company, which itself has a sordid history in the dope business.

The opium trade began in the early 1700s as an official monopoly of the British East India Company, which conquered India, and ran it on behalf of the British Crown and the financiers operating through the City of London. Indian-grown opium became a key component in the trade for tea and silk in China. The East India Company had a thriving business selling British textiles and other manufactured products in India, and selling Chinese silk and tea in Britain. But the Company ran into problems with the opium end of the trade. The influx of opium caused major problems for China, and led the Emperor to issue an edict in 1729 prohibiting opium consumption. Then, in 1757, the Emperor restricted all foreigners and foreign vessels to a trading area in the port city of Canton. A stronger edict in 1799 prohibited the importation and use of opium under penalty of death.

None of this stopped the British from continuing to flood China with opium, creating millions of addicts, but it did cause the East India Company to protect its tea and silk trade by shifting its Chinese opium operations to nominally independent drug runners who bought opium legally from the East India Company in Calcutta, and smuggled it into China. The most prominent of these drug-running firms was Jardine Matheson & Co. It was founded in 1832 by two Scotsmen, William Jardine and James Matheson. Jardine had been a ship’s surgeon with the East India Company, while Matheson was the son of a Scottish baronet. The firm today is controlled by the Keswick family. In 1839, the Chinese Emperor launched an anti-opium offensive, which included the confiscation of all opium stocks in the hands of Chinese and foreign merchants. The merchants put up a fight, but were ultimately forced to concede, turning in their opium stocks after being indemnified against losses by British officials.

In response, however, the British launched a propaganda campaign against China, accusing it of violating Britain’s right to “free trade.” Britain sent its fleet to China, to force the Chinese to capitulate to the opium trade. The action, known as the First Opium War, resulted in the Treaty of Nanking in 1842, under which China not only capitulated to the opium trade, but also agreed to pay reparations to the opium runners and gave the British control of the island of Hong Kong. However, the treaty did not specifically legalize opium, so the British launched a second Opium War, which resulted in the 1856 Treaty of Tientsin, which legitimized the opium trade and opened China up to foreigners even more.

As the opium and other trade with China expanded, Britain’s new territory of Hong Kong became a major imperial commercial center. The opium dealers gathered together to form a bank, the Hongkong and Shanghai Bank, as the financial flagship of the British opium trade. Over time, the bank—now known as HSBC—would extend its reach into the drug fields of the Middle East and Ibero-America, as befitting its role as the financial kingpin of Dope, Inc.

In 1978, the Hong Kong and Shanghai Bank, commonly known as the Hong- Shang, announced its intention to move into the U.S. with the purchase of Marine Midland Bank of Buffalo, New York. The U.S. dope trade had expanded significantly over the past decade, and the British were determined to grow it even further.

The move touched off a major political fight, which we describe in the accompanying article on the LaRouche movement’s battle to destroy Dope, Inc. Ultimately, however, HongShang succeeded in getting a national charter. In July 1979, the Lehman Brothers partner who chaired Marine Midland moved to convert the bank to a national charter. Despite Comptroller of the Currency rules which stated specifically that a bank may not change its charter merely to circumvent state regulation—and over the expressed opposition of the State of New York—the charter change was approved, clearing the world’s most notorious dope bank to take over a top-rank American bank.

HSBC extended its tentacles into America with the establishment in 1995 of a joint venture in California with Wells Fargo, the Wells Fargo HSBC Trade Bank; the same Wells Fargo, we should add, which took over Wachovia after that bank’s offices in Miami were raided by Federal law enforcement officials after it was caught laundering large amounts of dope money. Marine Midland also expanded, buying a large thrift institution.

HSBC took a another significant step in 1999, with the purchase of Republic New York Corp., and its Republic National Bank. Republic was founded and controlled by Edmond Safra. Republic had a large gold bullion operation, and also a large “bulk cash” business which was featured in a 1996 exposé in New York magazine, detailing how Republic was sending hundreds of millions of dollars a week in $100 bills to Russia to finance the expansion of the Russian mob.

Today, HSBC’s U.S. arm, HSBC North America Holdings, is the ninth-largest bank holding company in the country, with over $340 billion in assets. It is the sixth-largest U.S. derivatives bank, with over $4.4 trillion in bets outstanding.

Thanks mostly to its thriving dope business, HSBC has become one the biggest banks in the world. Among its leading acquisitions internationally: It took over the Mercantile Bank of India, London, and China, and the British Bank of the Middle East in 1959; and in 1992, it completed a slow takeover of England’s Midland Bank. In 1981, it made a bid for the flagship of the Inter-Alpha Group, the Royal Bank of Scotland, which was blocked by the British Monopolies and Mergers Commission.

In 1997, it made a major expansion into Ibero-America, buying parts or all of banks in Mexico, Argentina, Peru, and Chile, and founding a new bank in Brazil.

From the Far East to the Middle East to Ibero-America, everywhere the drug trade is flourishing, you will find HSBC. It may not handle the dope, but it does handle the money, making sure that the “citizens above suspicion” who run Dope, Inc. from places such as the City of London get their cut of the proceeds. Now HSBC has been caught red-handed laundering money in the U.S. It’s time we set an example and revoke its charter to do business here. This is a bank which has abused us, assaulted our people, and violated the law with abandon. Revoke its charter and shut it down. Now.