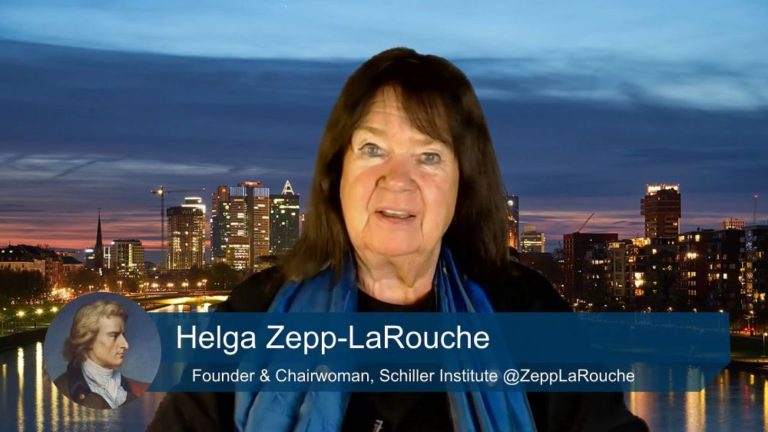 by Helga Zepp-LaRouche, Founder of the Schiller Institute

Hello, I greet you all over the world, listening to this conference. Now, since this is an international conference, let me say a few words of why the Schiller Institute is named according to the great German Poet of Freedom: The main reason is his magnificent image of man, which is linked to the idea that each and every person can be, in principle, to develop to be a beautiful soul. And that’s what you just got a glimpse of, with the beautiful performance by John Sigerson of An die ferne Geliebte, and Beethoven and Schiller in that sense are very similar, as towering giants of the German Classical period.

For Schiller, a beautiful soul means a person for whom freedom and necessity, beauty and passion are one, a state of mind, which according to Schiller only applies for a genius. The Schiller Institute also agrees fully with Schiller that the way to reach this goal lies in the aesthetic education, which is successful in the moment it’s pursued as a purpose. I’m really very thankful to my German teachers for awakening enthusiasm for Schiller’s concept of the beautiful soul when I was a pupil. His concept of the Sublime and his lofty ideal of art, with that, thoughts that have always provided me personally with a key to inner strength and independent thinking. I consider it a fortunate coincidence, that I first got to know through my own education, the ideal of a beautiful humanity, through the works of Schiller, and only then, armed with this vision of what man can be, I did look into the history of the 20th century.

My late husband, Lyndon LaRouche and I shared the belief that mankind’s moral fitness to survive depends on the ability to develop one’s thinking to the level that corresponds to this great Classical art. I have often expressed this conviction in many lectures and speeches, and I have often had the impression, that most people considered this to be a more or less curious point of view on my part. In the past weeks, however, during the coronavirus pandemic, this view has been confirmed from a very practical perspective. A lot of people reacted to the lockdown and the contact ban which was odered by many governments to the coronavirus pandemic, by acting out even more freely their hedonistic impulses, such as “escaping” to the mountains or to the beaches, with young people celebrating so-called “coronavirus parties,” and longing for the reopening of the clubs and the tattoo parlors, completely indifferent to the effects that such behavior can have on the overall course of the pandemic, and the lives of so many other people.

Friedrich Schiller, like many contemporaries of his time, had followed the initial phase of the French Revolution with the hope that it would bring the spirit of the American Revolution to Europe. In 1792, he was granted even honorary citizenship of France, by the National Assembly. But once the Jacobin Terror took over, he turned away in horror. In the Aesthetical Letters, which he wrote in response to the French Revolution, he developed the concept of aesthetic education and asked the question, “How is it that we are still barbarians?” And in the Fifth Letter, he describes the state of his contemporaries, which he would find as being surpassed in the reflection of the present today. “Man,” he says, “paints himself in his actions, and what is the form depicted in the drama of the present time? On the one hand, barbarity, on the other a state of lethargy. The two extremes of one human degeneracy and both together in one and the same period. In the lower, larger masses cause lawless impulses come to view, breaking loose when the bonds of civil order are burst asunder, and hastening with unbridled fury to satisfy their savage instinct, society set free. Instead of hastening upward into organic life, collapses into its elements. On the other hand, the civilized classes give us still more repulsive sights of lethargy, and of a depravity of character which the more revolting because its roots are in culture. I forgot who of the old or newer philosophers remarked that the nobler is more revolting in its destruction.”

Schiller responds to this dilemma, with the thesis that any improvement in the political realm can only come through aesthetic education, the ennoblement of the character of the individual. In the Ninth Letter, he defines the fine arts as the domain that can lead people into new areas of thinking and feeling that raise them above barbarism and lethargy. Like Confucius, Schiller was of the opinion, that one needs to take people during their leisure, when they’re free from their everyday burdens, and lift them up playfully to a higher level of fine arts, that from the moment they become involved in the creativity of the composer, the painter, the poet, and leave the domain of their ordinary desires, they at least in that moment of immersion in the work of art, take part in something larger that goes beyond the level of sensuality. That is why Schiller insisted that art only deserves the name if it is beautiful, because only beauty as a concept that corresponds to reason, and appeals to sensuality can reconcile the mind with the emotions: That is, it can develop the emotions up to the level of reason.
Schiller expressed this notion already in one of his very early works, “The Theosophy of Julius,” where he says: “All spirits are attracted by perfection. There are many deviations, but there is no exception to this, for all strive after the condition of the highest, free exercise of their powers. All possess the common drive to extend their sphere of action, to draw themselves, to gather in themselves, to appropriate everything that they recognize as good, as excellent, as delightful. To contemplate the beautiful, the true, and the excellent, means to immediately take possession of such properties. Whichever condition we perceive, we enter into. At the moment we think of them, we become a possessor of a virtue, author of an action, discoverer of a truth, possessor of a happiness. We ourselves become the object perceived.”

“We ourselves become the object perceived.” This is also the insight behind Plato’s warning that children should not, under any circumstances, look at the tragedies of the great tragedians, for the issues raised there, such as nemesis, revanche, and doom. Schiller even insisted that the artist had to ennoble himself to the highest ideal of humanity, before he dared to move his audience, and that, because he was so acutely aware of the profound effect of art, for good or for bad.

After Schiller’s death, Wilhelm von Humboldt wrote in his essay, “Schiller and the Cause of His Spiritual Development:” “Concerning the concept of beauty, concerning the aesthetic in creation and action, and thus the foundation of art, as well as art itself, these works contain everything essential in a manner which can never be excelled. Never before were these questions discussed in such a pure, complete and illuminating way as by Schiller. Infinitely much was thus gained, not merely for the positive analysis of concepts, but also for aesthetic and moral education. Art and poetry were directly joined to that which is most noble in humanity, were presented as that by which humanity first awakens to the consciousness of the intrinsic larger which strives to transcend the finite.”

Have we today lost all receptivity to this dimension of human identity? The instance in which the individual’s life is linked to the higher goals of humanity? Is it the case that the complex transcendent creations of Classical art, which accomplished just that, belong to the past never-neverland, and that the present belongs to spectator sports and beauty salons?

But perhaps there is a more hopeful prospect. During the coronavirus confine, there were spontaneous manifestations of a deeper need for Classical art, which emerged in many places around the world. People in Italy, France and Germany, and other countries, spontaneously started singing Verdi and Beethoven from their balconies, or playing on their instruments. And perhaps the realization is gaining ground that after this pandemic, which will be, no doubt, with us for a while, nothing will be the same as before. In any case, it demands of us a spirit that most clearly can be found in Schiller’s concept of the Sublime, which Schiller says does not protect our weak physical existence, but it can make us morally secure.

Therefore, let us use this time of unprecedented challenges to delve deeper than ever into the works of the best Classical art, and through dialogue among the greatest compositions of all cultures of this world, to create the basis of a new Renaissance of the Classics, which is the essence of what the New Paradigm must follow after this crisis. Because, what Schiller says in the introduction to his play, The Bride of Messina, is absolutely true. “Genuine art, however, does not have as its object a mere transitional game. Its serious purpose is not merely to translate the human being into a momentary dream of freedom, but to actually make him free. It accomplishes this by awakening a power within him, by using and developing this power to remove to a distance of objectivity the sensory world, which otherwise only weighs us down as raw material and oppresses us as a blind force, to transform the sensory world into a free creation of our spirit, and to control the material world through ideas.”

So, we need a Classical Renaissance, of Classical thinking. And the best you can do, is become an active part of that.