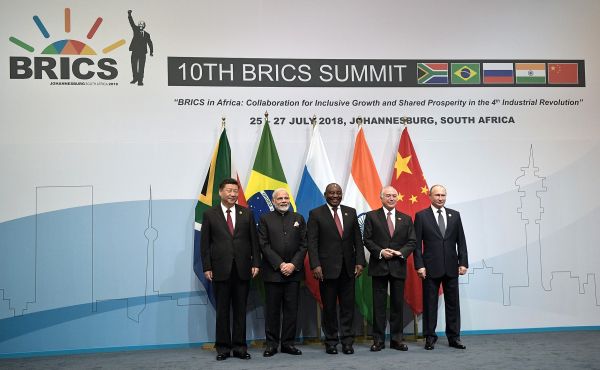 July 28–Inspired by the epic rise of China, a strategic reorientation of emerging and developing countries is taking place, gradually creating a worldwide economic order based on completely different principles. While the West is trying in vain to uphold the old paradigm of the neoliberal economic system, more and more nations are working with the BRICS, the Shanghai Cooperation Organization (SCO), and other regional organizations under the rubric of the Belt and Road Initiative, on the basis of win-win cooperation, and demonstrating that the world can be organized in a much more human fashion than that which is exhibited by the European Union with its barbaric refugee policy.

“I want the Chinese model. Because what China has achieved is incredible. The way in which they have overcome poverty has never been seen in history!” These are the words of Pakistan’s newly elected Prime Minister, Imran Khan, who announced at the same time that he would respond to every positive step on India’s part in improving their relationship, with two steps from Pakistan. This was precisely the mood at the recently completed tenth annual summit of the BRICS–i.e., Brazil, Russia, India, China and South Africa–in Johannesburg, South Africa, which was completely shaped by the spirit of the New Silk Road. It signifies nothing less than that a new era of humanity has begun, in which all nations of the world have the right to development on the basis of scientific and technological progress.

Chinese President Xi Jinping emphasized, in his July 25 speech to the BRICS Business Forum, which included Indonesia, Turkey, Argentina, Jamaica, Egypt and many African leaders, -that “The international community has reached a new crossroads” and must build a whole new platform for international relations. With an inspiring cultural optimism that has been lost in Europe, Xi emphasized the crucial role of scientific progress as the engine of economic construction:

Good afternoon! I am delighted to visit South Africa, the “rainbow nation,” once again and meet you here in the beautiful city of Johannesburg. The first international summit I attended after taking office as Chinese president five years ago was the fifth BRICS Summit held in Durban. Three years ago …

Science and technology, as the primary production forces, have provided inexhaustible power driving progress of human civilization. Humanity had made giant leaps from agricultural to industrial civilization, and is now facing a new round of scientific and technological revolutions and industrial transformations. If countries seize the opportunities these offer, they will be able to achieve dynamic economic growth and a better life for their people.

Xi noted that Africa is home to “more developing countries than any other continent,” and therefore has “more development potential than any other region in the world.” The BRICS should therefore “strengthen cooperation with Africa, support its development, and make BRICS-Africa cooperation a model for South-South cooperation.” This intensification will be further enhanced at the upcoming Forum on China-Africa Cooperation (FOCAC) in Beijing in September, he indicated, and the integration with the Belt and Road Initiative will continue.

Indian Prime Minister Modi said that maintaining peace and developing Africa was a top priority for his government. He and South African President Ramaphosa signed an MOU for setting up a Mahatma Ghandi-Nelson Mandela Center of specialization for artisan skills and agricultural research and education.

President Putin, in his speech, announced that Russia would work to “light up” the African continent and provide it with energy, in particular in the field of nuclear energy, in which Russia, he pointed out, has taken the technological lead in the world.

The increase in trade between China and Africa over the past 40 years has been enormous: from $765 million in 1978, trade had already reached $170 billion in 2017 and will soon be $400 billion per year. Overall, the economic importance of the BRICS states is rapidly increasing. Last year, the total gross domestic product of these countries amounted to more than $17 trillion, more than that of the EU. President Xi had paid state visits to United Arab Emirates, Senegal, Rwanda, and South Africa, and following the summit, travel went to Mauritius.

Prime Minister Modi visited Uganda, Rwanda and South Africa. Moreover, the governments of China and India have decided to invest jointly in Africa in the context of the Belt and Road Initiative.

Another component of the new economic order is the “BRICS Plus” concept, which expands the platform for economic partnerships among other states and regions and the BRICS nations and for the strengthening of economic, but also strategic cooperation. The participating countries intend among other things, to increase the number of member states and thus the number of votes of the bloc at the IMF, thereby influencing key decisions.

President Xi emphatically took the view at the summit—with distinct reference to Donald Trump’s threats of tariffs on imports—that there could be no winner in a trade war. He said that one would have to choose between cooperation and confrontation, between mutual benefit and the possibility of beggaring one’s neighbor, but those who pursued this latter course would only end up harming themselves.

This effect has already been observed since the sanctions against Russia, which many experts in that country consider to be serendipitous because they have forced Russia to rebuild many areas of production that had been dismantled during the Shock Therapy of the Yeltsin years, and at the same time to deepen relations with China and with Asia as a whole. just as the US and EU sanctions imposed by the United States Congress against Russia, Trump’s threat to impose tariffs against China has the effect, apparently overlooked by its authors in their arrogance, of bringing the BRICS Plus countries together and quickening their desire for a fairer and more balanced economic system.

At a seminar given by the Chongyang Institute for Financial Studies at Renmin University in Beijing, Putin’s economic adviser Sergey Glazyev pointed out that, given the poor state of Western economies—which are still focussed heavily on speculation rather than the physical economy—there is increasingly close cooperation between the Belt and Road Initiative, the BRICS, the SCO and other organizations. If the pressure on these countries continues to grow, he said, it would only accelerate the tendency to trade using their respective currencies, as opposed to the dollar.

The Chinese government’s annual report, presented by Prime Minister Li Keqiang at a recent State Council leadership meeting, shows that in terms of its domestic economy, China is doing its best to protect the country against the effects of a new crash in the trans-Atlantic financial system. In the face of major international challenges, China will implement a package of measures to strengthen the real economy, including tax relief for investment in basic research, $200 billion in infrastructure spending, promotion of lending to small and medium-sized businesses, and decisive action against “zombie companies” or any other form of speculation.

The dynamic that is now developing around the Chinese model and the BRICS as the center of a new global economic system, is the result of decades of IMF-World Bank policies that, with their demands for so-called “structural adjustment” and “conditionalities” in developing countries, have not only prevented their development, but have facilitated a gigantic transfer of capital from these states to the banks of the neo-liberal financial system. The BRICS and many developing countries have drawn the appropriate lessons from these policies, which are largely responsible for the refugee crisis—and from the wars built on lies in Southwest Asia and North Africa–n , just as they drew the lessons from the Asian crisis of 1997, in which mega-speculators such as George Soros devalued the currencies of many Asian countries by as much as 80% in mere days.

We in the West have exactly the choice that Xi Jinping has identified. We can accept the multifaceted offerings of China and, together with the BRICS and other states, help to build up Africa, Southwest Asia, and Latin America, and thereby achieve a future perspective for ourselves. However, this would mean saying goodbye to the casino economy, and would require the re-introduction of a Glass-Steagall banking separation system, the creation of National Banks, and a New Bretton Woods credit system.

Or we can try to stick to the current, hopelessly bankrupt neoliberal financial system, which aims to maximize profits at the expense of a large part of the population and developing countries. At that point, we would have the choice between a new crash, this time far worse than 2008, and a financial blowout triggered by a dollar collapse if the states of the new emerging economic bloc collectively resist the U.S. confrontation.

We have a choice: Either we remember our best traditions in the United States and Europe, i.e., the American System of economics of Alexander Hamilton and the principles of the economic miracle in Germany after the Second World War, plus the tradition of our classical culture–which means working together with China and the BRICS on the development of the world–or we will have only ourselves to blame, if our cultures are put on display very soon in the museums of Africa and Asia, as examples of societies that were morally unfit to survive.

“The rationale behind this BRICS Plus concept is to create a platform for greater interaction and partnerships amongst countries of the Global South to shape the agenda to effect changes in the global economy….” It portends historic policy shifts to come, in particular at the September meeting in China of the Forum on China-Africa Cooperation (FOCAC)