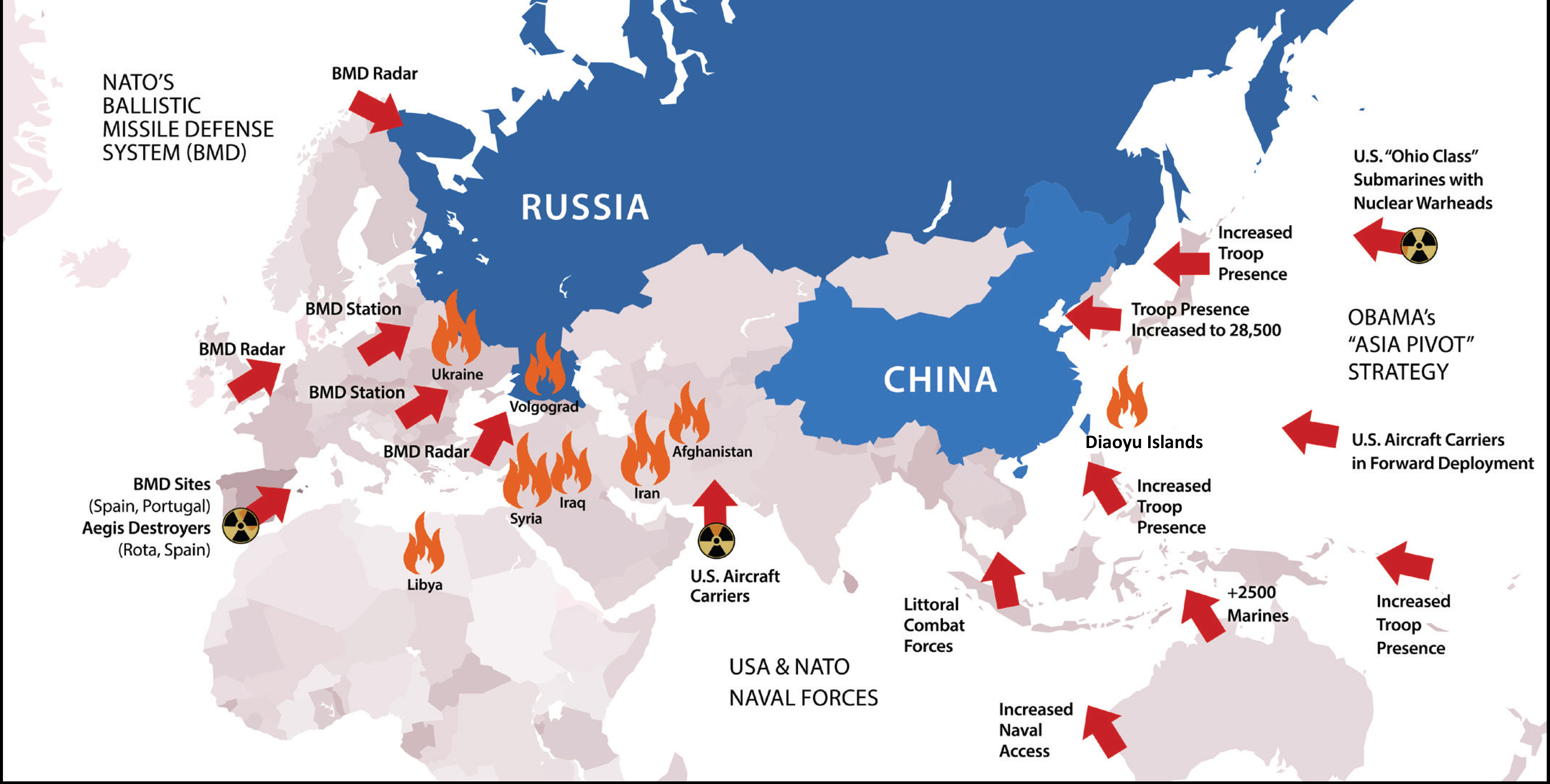 The danger of conflict outlined in “Reflections upon entering a new year – 2014: A choice between two systems,” has become ever more present with the recent developments in Ukraine, and Lyndon LaRouche warned February 3, that the period of the last week of February and the beginning part of March was the likely time-frame in which the world would move to the threshold of thermonuclear confrontation.

Look at the accompanying map, to understand the context for this crisis. The encirclement of Russia and China shows the British imperial intention to crush the Eurasian region, by continuing and escalating actions of terrorism and regime changes.

It is in this context that the neo-Nazi coup in Ukraine takes on its significance, a coup instigated by massive outside interference. This was very clearly proven by the discussion between Assistant Secretary of State Victoria Nuland and the US Ambassador to Ukraine, Geoffry Pyatt, which was leaked February 6, in which they planned the new leadership of Ukraine – and the very personnel they discussed then is now in charge.

As of this writing, an all-out mobilization to get President Obama out of office, is taking place throughout the United States and in Washington D.C., which includes mass leafleting, radio ads and intense confrontations with U.S. Congressmen. Obama, who is nothing but a puppet for the British empire, has control of the nuclear “button” for the West and therefore holds the key. As he has committed numerous impeachable offenses, his demise is not only possible but absolutely necessary for the sake of the future of humanity.

It is in this context that we publish the statement by Natalia Vitrenko, below. 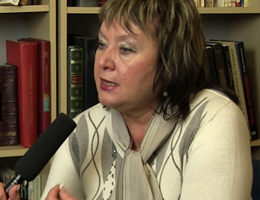 Feb. 24, 2014 (EIRNS)—Below is a statement made by Natalia Vitrenko, Chairman of the Ukrainian PSPU. In addition, Vitrenko keynoted a webcast, broadcast on the site of the Paris-based Solidarity and Progress (S&P) organization. A transcript of her remarks on that webcast is available.

The entire world is disturbed by the events in Ukraine. The heart of the matter must be understood. The Progressive Socialist Party of Ukraine, as a left opposition party that has fought and continues to fight against the domestic and foreign policy conducted both by the Orange forces under Yushchenko and by the alliance of the Party of Regions and the Communist Party of Ukraine, under Yanukovych, finds it necessary to present our evaluation.

On February 22, under the automatic-weapons barrels of the Euromaidan guerrillas and terrorists, the Parliament carried out a neo-Nazi coup d’etat.

Flouting all the provisions of the Constitution of Ukraine and of international law, and trampling on European values, the Parliament exceeded its authority and committed acts that are subject to criminal punishment. Washington and Brussels, who have been telling all the world that the Euromaidan is a peaceful action by the Ukrainian people, who have made their choice for Europe and are defending democracy and European values, must admit that none of this is the case. They have supported a Nazi putsch, carried out by the guerrillas, terrorists, and politicians of the Euromaidan in the geopolitical interests of the West.

There are indisputable proofs that this is the case:

2) exceeding its authority and flouting Article 19 of the Constitution, the Parliament has appointed supervisors for
• the Ministry of Internal Affairs,
• the Security Service of Ukraine,
• the Prosecutor General’s office.

These supervisors have been appointed for the purpose of the Euromaidan’s coercing the Constitutional institutions of the state, in order to satisfy the interests of the West in an unconstitutional manner;

4) the Parliament, protecting the Euromaidan guerrillas and terrorists, has amnestied and declared to be heroes all of its participants, initiating a process of giving them high positions in the government. This means that those who took up arms and killed innocent citizens and members of law enforcement who were guilty of no crime, those who seized and destroyed administrative buildings and weapons depots, and those who organized summary justice and committed blackmail and kidnapping, will escape any responsibility for their actions. Thus, the basis for the formation of a neo-Nazi, repressive state machine is being created.

Washington and Brussels should heed our warnings. We charge them, and the political forces they have brought to power, with full responsibility for the establishment of a totalitarian, Nazi regime in Ukraine, with the inevitable gross violation of the rights and freedoms of millions of our fellow citizens.

The U.S.A. and the EU should know, that the political parties and movements that have seized power, among which are neo-Nazi forces (such as Svoboda and Right Sector), announced as they did so, that they were carrying out a national revolution under the slogans
• “Ukraine for Ukrainians,”
• “Glory to the Nation — Death to the Enemies!”,
• “Knife the Muscovites and Hang the Communists!”, and so forth.

As of February 22, those now in power bear complete responsibility for all Ukraine and for violations of the rights and freedoms of citizens.

The Euromaidan guerrillas and terrorists continue to seize administrative and government buildings in southeast Ukraine. Voters are being stripped by terrorist methods of the right to have the representatives they elected function in local councils. Civilians attempting to defend their elected officials are being mercilessly shot from Kalashnikovs as well as non-lethal weapons, as happened February 22 in Luhansk.

The guerrillas, without possessing any government authority and in the absence of a state of emergency, have arrogated to themselves to block major highways with axes and cudgels, to run checkpoints, and to inspect vehicles and the documents of their passengers, barring those they disapprove of from leaving Kiev. They are blockading the access roads to airports, thereby grossly violating the European Convention on Human Rights and Basic Freedoms, which guarantees the inviolability of the individual, freedom of movement, the presumption of innocence, and the right to security and life. They are abasing the dignity and rights of the entire people of Ukraine.

The intention to ban the transmission of Russian Federation television channels in Ukraine, as being mouthpieces of a hostile state, has been announced. This is how the new authorities are defending European values like freedom of speech and opinion.

Lists for “lustration” [the disclosure of personal information] have begun to be drawn up. This mechanism will be used to strip the civil and political rights of those who do not share the neo-Nazi views of the new Ukrainian authorities.

Sickening vigilante justice continues throughout the country. Deputies of the Supreme Rada of Ukraine who are disapproved of are beaten (including hit with stones), and there is mass intimidation of elected local council members that their families will be destroyed (especially their children) if they fail to carry out the political aims of those now in power. The offices of political parties that are disapproved of are being burned on a mass scale, while political parties and public organizations that do not share the ideology and goals of the new Ukrainian authorities are receiving public threats of persecution and banning.

On behalf of the Progressive Socialist Party of Ukraine, I declare:

We do not recognize as legal the coup d’etat that has been carried out, and we do not recognize as lawful the activity of the new Ukrainian authorities. We condemn their total violation of the rights and freedoms of the citizens of Ukraine on the basis of ethnic, cultural, religious, or political factors.

We appeal to the European Parliament and the UN Security Council, demanding immediate intervention in what is transpiring in Ukraine, to defend the rights and freedoms of citizens, and to prevent the new Ukrainian authorities from unleashing a Third World War on the Eurasian continent.

—Natalia Vitrenko
—Chairman of the PSPU