Paris (People’s Daily) – A declaration jointly signed by experts from multiple countries was published on March 24 by a think tank, the International Schiller Institute, calling for an end to an anti-China campaign by some Western countries. Jacques Cheminade, one of the signers and President of French political party Solidarity and Progress, was recently interviewed by People’s Daily. 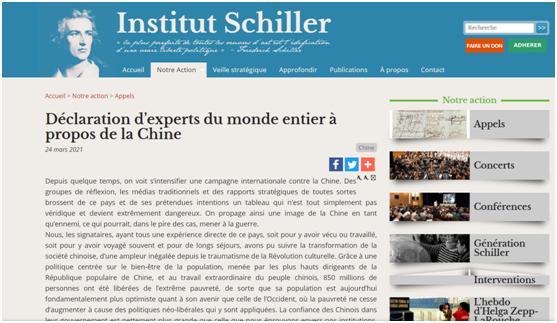 (Screenshot of the declaration)

Speaking of the purpose of this declaration, Cheminade said that the attitude of some Western governments towards China seems extremely worrying. “Faced with a country which has managed to eliminate the conditions of extreme poverty among its population in less than forty years and, at the same time, to develop its advanced technologies, in particular in the space and nuclear fields, the hostility shown by the United States and the European Union are creating a situation of cold war that risks taking us even further,” said Cheminade, emphasizing that the experts support the prospect of a win-win international order.

Cheminade spoke highly of the great changes of China. China has achieved unprecedented economic development. “In China, we see before our eyes a new world, where, as the philosopher said, ‘only change is permanent’.” In his opinion, China is full of vitality and has embarked on a path of socialism with Chinese characteristics and insists on peaceful development with no will to impose its system and model on other countries.

In 2019, Cheminade visited China for the first time and participated in the Euro-Asia Economic Forum in Xi’an, capital of northwest China’s Shaanxi Province. He said that he met people happy with the improvement of their standard of living and proud of the role of their country in the world. Last year, China’s Huazhong University of Science and Technology invited him to teach a course to analyze the joint construction of the “Belt and Road” from a European perspective. He hopes to communicate with Chinese scholars and students on this as soon as possible.

Cheminade pointed out that some think tanks, Mainstream Media, and strategic reports of all sorts are painting a picture of China which was simply not true. “This campaign is that of Western circles, especially Anglo-Americans, who fear that the development of China will call into question their privilege and their unjust international order. Some people who claim to be researchers but are, in fact, complicit in this unjust order are also participating in this campaign. Our political commitment is to fight them because they constitute a danger for world peace.” said Cheminade.

He also emphasized that scientific and human development should not have borders, calling for more cooperation between researchers, engineers and more generally officials from all over the world to set an example of peace through mutual development.

“The way in which China built capable field hospitals in less than two weeks and produced effective vaccines available to Latin American, African and Asian countries to fight against the COVID-19 pandemic should be an example to the world. The patriotism of the Chinese people, manifested both in the isolation measures and in the implementation of the tracing of the virus, is an example for our own country,” Cheminade said.

Stressing that China has a rich culture in various fields such as philosophy, poetry, painting, architecture, and music, Cheminade called for a dialogue of cultures to find solutions to the crises that challenge the entire humanity. The West should do better to respond to the offer of cooperation, than seeking confrontation, he added.