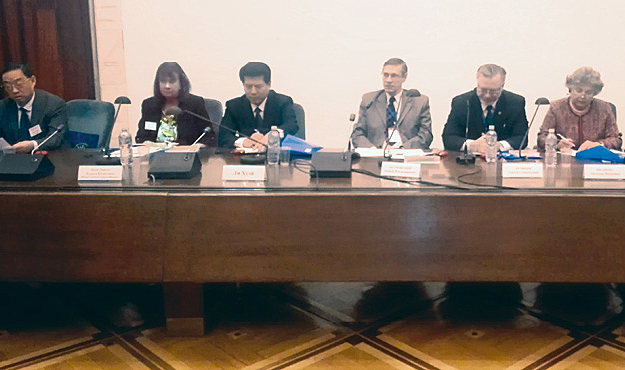 [Mrs. Zepp- LaRouche delivered this presentation during the proceedings of  the October 24-25 23rd International Academic Conference of the Institute of Far Eastern Studies of the Russian Academy of Sciences (RAS) in Moscow, as well as the Academic Council for Comprehensive Studies of Contemporary Studies of Contemporary China. The conference was titled “China, Chinese Civilization and the World: Past, Present, and Future.”]

The big question which should concern all thinking human beings on this planet, is essentially the same which was hotly debated in the young American republic as reported in the “Federalist Papers,” is human society capable of an efficient form of self-government, only that this time it is not a question of one nation, it concerns all of humanity: The need for a new paradigm in the world order.

Tensions in a world plagued by multiple crises seem to increase towards a breaking point: the danger of a new this time systemic financial crash of the transatlantic financial system, an unprecedented polarization inside the U.S. around the ongoing coup attempt against the President of the United States, False Flag operations, Goebbels-like deception operations against entire populations, drug epidemics which are a new form of Opium Wars, the global migration crisis, terrorism and Nazism, an increase of centrifugal forces in the EU, the re-emergence of aggressive geopolitically motivated efforts to defend an order, which no longer exists—just to list some of the challenges. The world is in disorder.

In light of such a complex and seemingly completely disunited world, how realistic is then the perspective laid out at the 19th National Congress of the CPC by Chinese President Xi Jinping where he defined the goal for China until the year 2050 is to become a “strong, democratic, culturally advanced, harmonious, and beautiful” fully modernized country and even spoke at some point of the building of a “beautiful world” for all nations to participate in?

If one looks at the crises and challenges listed above as unrelated individual problems, one ends up in a “bad infinity,” where the solution to many of them seems impossible. But if one recognizes, that all of these problems have common threads in that they are the derivatives of the old paradigm of an epoch going under, one can find the solution by being informed by the principles of the new epoch.

There are two “game changing” topics in the near future, which will create totally opposite pathways for the future. The first one concerns the monumental battle fought out at this point in the U.S. where either the coup attempt against President Trump will be successful and he be driven out of office by one way or the other, or, if the collusion of the heads of intelligence agencies of the Obama administration with the British intelligence services GCHQ and MI6 in orchestrating “Russiagate” against Trump, in order to prevent him from realizing his intention to put the relationship between the U.S. and Russia on a good basis, will lead to the criminal prosecution of the perpetrators. Were the Democrats to win the House of Representatives in the midterm election, they will try to bury the ongoing investigation in the Congress, and the confrontationalist policies we have seen in the sanctions against Russia and the trade war against China and the recent speech by Vice President Pence, will be escalated instantly. If Trump can consolidate his position, despite the many hawkish tones coming from the U.S. now, there does exist the potential that he will be able in the second half of his first term to improve the relation with Russia and return to his initial positive attitude towards China.

The second related game changing issue is a perspective to overcome the “Thucydides Trap,” the apparent conflict between the power dominating the world up to now, the U.S., and the rising power, China, by defining a solution which goes way beyond the bilateral situation of the two and which addresses the existential dangers for all the nations and thus shifting the level of discussion and thinking to a higher plateau.

What my husband, Lyndon LaRouche, has already proposed several years ago is still valid: The four most powerful nations in the world, the U.S., Russia, China and India—supported by others like Japan, South Korea and others—must set up in the short term a New Bretton Woods system, to avoid the potentially devastating consequences of an uncontrolled financial collapse. This new international credit system must correct the flaws of the old Bretton Woods system, which was not realized as President Franklin Delano Roosevelt intended, but was corrupted by the influence of Churchill and Truman. It must guarantee the unconditional sovereignty of each and all nation-states participating in it, and it must promote their unlimited opportunities to participate in the benefits of scientific and technological progress to the mutual benefit of each and all. This New Bretton Woods system must have as its most important feature a profound change in the monetary, economic and political relations between the dominant powers and the so-called developing nations. Unless the inequities lingering in the aftermath of modern colonialism are progressively remedied, neither can there be peace, nor can such challenges as the migration crisis or terrorism be overcome.

The basic conception for such a new credit and economic system already exists in principle in the Belt and Road policy of President Xi Jinping. In the five years of its existence it has created an unprecedented dynamic of hope and optimism among the approximately 100 countries participating in it, and given the rate of progress in such a short time it is obvious, that the goal defined by President Xi Jinping, of a “beautiful world” by 2050 for all of humanity is absolutely achievable.

The new set of international relations required for the New Paradigm is already in the process of being built. The increasing integration of the Belt and Road Initiative, the Shanghai Cooperation Organization, the Eurasian Economic Union, and the Global South organizations, is progressing successfully and is already creating completely new strategic alliances for the mutual benefit of all participating in them. The “Spirit of the New Silk Road” has caught on in most countries of Asia, Latin America, it has for the first time in centuries given hope to Africa, which President Xi has called the continent with the greatest development potential and which President Putin has promised to “light up by providing it with nuclear technology.” Many are now speaking of “Africa, the new China with African characteristics!” And despite the reluctance of the European Union and the present Berlin government, there are an increasing number of people in Europe, who want to be fully integrated in the New Silk Road, such as the 16+1 countries, Spain, Portugal, Swiss, Holland, Belgium, but especially Austria and Italy.

The biggest, and unavoidable challenge, however, will be to find a solution, which includes the U.S. Given the actual level of militarization of the U.S., both in terms of the armed forces as well as the arming of the population domestically, the chance, that the U.S. would disintegrate or accept to be excluded from an alternative world system as peacefully as it happened with the end of the Soviet Union is probably tending towards zero. The military policy of President Putin, announced on March 1, regarding Russian military science and the strategic alliance between Russia and China, shows Russian and Chinese clarity on this. So, if the Thucydides Trap is supposed to be avoided, there has to be a design of a solution, which integrates the U.S. in a higher order of organization of the world order.

The common political platform offered must be conceptualized from the standpoint of what Nikolaus Kusansky defined as a completely new form of thinking, his famous Coincidentia oppositorum, the One, which has a higher order of reality than the Many. This is already implicit in President Xi Jinping’s conception of the “Shared Community for the Common Future of Mankind.”

Rather than approaching the question of the new set of relations among the nations of the world from the standpoint of proceeding from the status quo, the vision, how the human species will have grown into adulthood in 50 or a 100 years from now must provide a concrete set of policy cooperation proposals. By that time according to the scientific theory of Vladimir Vernadsky, the Noosphere will have advanced its dominance over the Biosphere qualitatively and new generations of scientists and classical artists will communicate with each other based on the search for new physical and artistic principles.

As the German rocket scientist and space visionary Krafft Ehricke elaborated, the extension of infrastructure into first nearby space, as a precondition for interstellar space travel, is the necessary next level of the evolution of the human species. As the collaboration on the International Space Station and as the eye opening findings of the Hubble Space Telescope have demonstrated, the emphasis on Mankind as a space-faring species completely changes the sense of identity of all astronauts, engineers and scientists involved. It has also completely replaced the notion that we are living in an Earth-bound system, where opposing geopolitical interests have to quarrel about limited resources, with the idea that Mankind has just begun to make the very first baby steps into a universe, in which there are an estimated two trillion galaxies.

The Chinese space program will soon provide another unprecedented game-changer by leading the world into a new scientific and industrial revolution. The ongoing Chang’e lunar missions include an ambitious program to bring back helium-3 from the Moon as fuel for controlled thermonuclear fusion on Earth. Once the human species can control thermonuclear fusion, we will have energy and raw material security for the entire human kind for the foreseeable future to come.

Going in the same direction, the Chandrayaan-2 mission of the Indian Space Research Organization (ISRO) will analyze the lunar crust for traces of water and helium-3. President Trump declared manned space travel, the return to the Moon, and missions to Mars and “worlds far away,” to be a national mission again. These, and related missions by the other space nations, will not only benefit the countries involved, but all of Mankind. Space science will transform every aspect of life on Earth, as the same general technologies and approaches to create habitable conditions in “wastelands” on the Earth, as with “Umka,” the Russian city planned for the Artic, will be used to create villages on the Moon. Space technology will completely revolutionize the access to advanced medical care on every spot on Earth, agriculture will benefit from many aspects of space research. The combination of a fusion economy and the industrialization of the Moon, as the next steps in an unlimited process of Mankind’s continued mastery of the laws of the universe, will mean an entirely new economic platform in the sense defined by Lyndon LaRouche.

If the many human beings in distress in the world—be it fleeing as a refugee from the scourges of poverty and war, or seeing society falling apart with an increase of violence, alcoholism, drug abuse or depression, or any other expression of desperation—knew about the immediate potentials for a breakthrough to a new era of Mankind, the New Silk Road Spirit would catch on and become the beacon of hope for everybody.

The ordering principle for a disunited world today can become the basis for joint leadership of the Presidents of China, Russia, India and the United States.