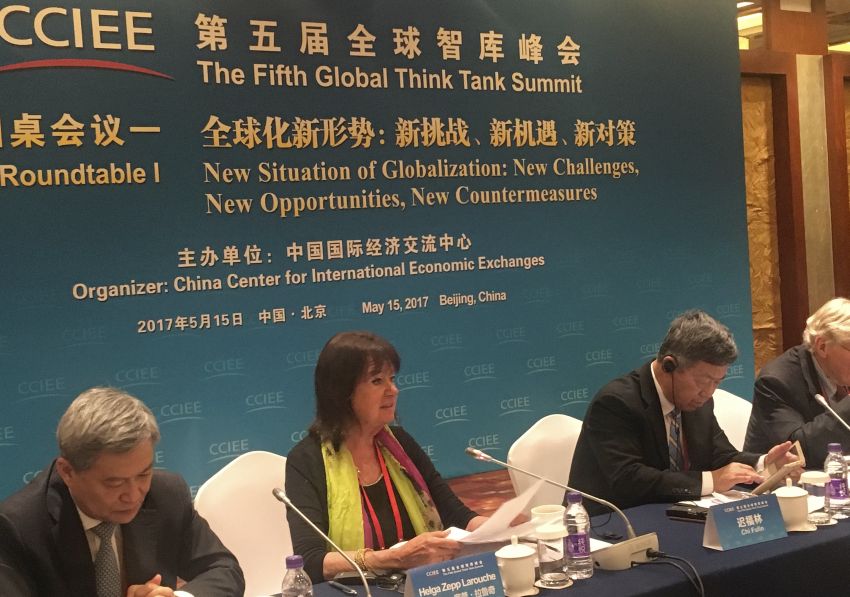 On the opening day of the May 14-15, 2017 Belt and Road Forum for International Cooperation, in Beijing, Helga Zepp LaRouche, founder and chairman of the Schiller Institute, participated in the “Thematic Session on Think Tank Exchanges,” on the panel titled, “Belt and Road for Facilitating Strong, Balanced, Inclusive and Sustainable Global Economy.”

The Belt and Road Becomes the World Land-Bridge

There has been a breathtaking dynamic of the New Silk Road in the three and a half years since pronounced by President Xi Jinping in 2013. The Belt and Road Initiative has the obvious potential of quickly becoming a World Land Bridge, connecting all continents through infrastructure, such as tunnels, bridges, reinforced by the Maritime Silk Road. As such, it represents a new form of globalization, but not determined by the criteria of profit maximization for the financial sector, but for the harmonious development of all participating countries on the basis of Win-Win cooperation.

It is therefore important, that one does not look at the BRI from the standpoint of an accountant, who projects his statistical viewpoint of cost-benefit into the future, but that we think about it as a Vision for the Community of a Shared Future. Where do we want humanity as a whole to be in 10, 100, or even in a 1000 years? Is it not the natural destiny of mankind, as the only creative species known in the universe so far, that we will be building villages on the moon, develop a deeper understanding of the trillions of galaxies in our universe, solve the problem of till now incurable diseases, or solve the problem of energy and raw material security through the development of thermonuclear fusion power? By focusing on the common aims of humanity we will be able to overcome geopolitics and establish a higher level of reason for the benefit of all.

It is obvious, that the World Land Bridge is ideal for completing the development of the landlocked areas of our planet. The colonialization of nearby space will be the obvious next phase of the infrastructural opening up of the natural habitat of man.

Looking at the world land map, the United States is not merely a country surrounded by two oceans and two neighbors, but can be a center part of an infrastructure corridor which connects the southern tip of Ibero America through Central and South America with the Eurasian transport system via a tunnel under the Bering Strait. Since President Xi Jinping made the offer to President Trump for the U.S. to join the Belt and Road Initiative, there is now a practical proposal on the table, where the U.S. can become an integral part of the World Land Bridge. The infrastructure requirements of the U.S., which are enormous, could be a perfect opportunity to convert all or part of the $1.4 trillion China is holding in U.S. Treasuries into such investments via an infrastructure bank. For example, the U.S. really needs approximately 40,000 miles of fast train lines, if they would want to match the Chinese plan to connect every domestic larger city by fast train by the year 2020.

The U.S. economy would experience a tremendous boost through such a grand-scale infrastructure investment, and could in turn export into the fast growing Chinese market, and once competition is replaced by cooperation, the opportunities for joint ventures between the U.S. and China in third countries are enormous.

Since President Trump has declared his intention to reintroduce the American System of Economy of Alexander Hamilton, Henry C. Clay and Abraham Lincoln, and also reintroduce the Glass-Steagall legislation of Franklin D. Roosevelt, the possibility of an early establishment of a National Bank and a Credit System in order to channel Chinese holdings into infrastructure investments is near.

While more and more European nations, both outside and within the EU, are recognizing the tremendous potentials of the BRI and express the intention to become a hub for Eurasian cooperation, the EU itself has been reserved, to be diplomatic.

There is, however, one huge challenge, where the member states of the EU could be convinced to cooperate with the BRI: It is the refugee crisis. The only human way to heal this moral wound of Europe is the active integration of European nations in a Grand Design development plan for all of Africa with the BRI.

The positive new prospect of U.S.-Russia de-escalation and military-to-military cooperation in Syria, along with the Astana process, now puts stabilization of the entire region in sight. Offers by China to extend the New Silk Road to Southwest Asia already exist.

The New Silk Road must–as the ancient one did–lead to an exchange of the most beautiful expressions of culture of all participating countries in order to succeed. The true meaning of Win-Win cooperation is not just the material benefit of infrastructure and industrial development, but of making the joyful discovery in other cultures of the beauty of their classical music, poetry, and painting, and, by knowing them, strengthen our love for mankind as a whole.

In the building of the World Land Bridge all nations will cooperate on studying how to apply the laws of the Noosphere to the establishment of durable forms of self-government. The development of the creative mental powers of all people in all nations, will give all of mankind the sense of unity and purpose which will make our species truly human. When we organize our societies around scientific and artistic discovery, we will perfect our knowledge on how we can continuously advance the process of self-development of mankind, intellectually, morally and aesthetically, and we will find our freedom in necessity–doing our duty with passion!