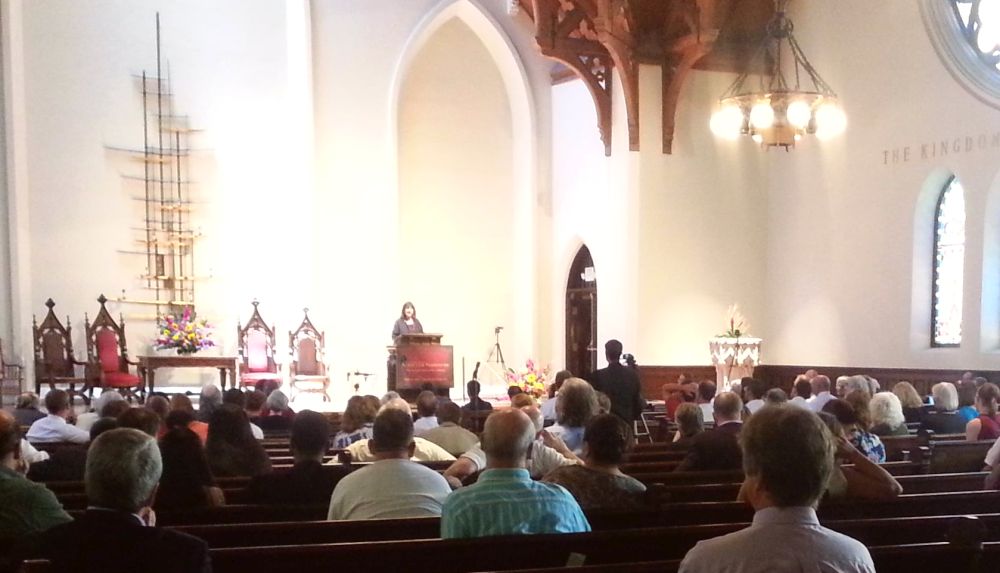 Creating a new paradigm for mankind: The Second American Revolution

On June 29th a truly unique event unfolded in San Francisco, namely the fifth in a series of international conferences, initiated by founder of the International Schiller Institute, Helga Zepp LaRouche, with the intention of creating a ‘New Paradigm’.

In taking this initiative, in the midst of an intensifying general global crisis, Mrs. LaRouche has emphasized that the goal of these conferences is nothing less than the creation of a ‘New Paradigm’, and has made it clear that these would not focus only on the negative – how bad things are, who is responsible for the deteriorating conditions on the planet, and why? – but on solutions, which require a change in the conception of man, in the way that human beings conceive of themselves and their purpose of their lives, so that a change in the direction of policy is not based on momentary popular opinion, which can be easily manipulated, but on a more profound, and sustainable, scientific, humanistic basis.

The creation of the Schiller Institute in 1984 by Mrs. LaRouche represented a forceful intervention into policy fights on this higher level. The example of Friedrich Schiller, as a poet, patriot and world citizen, whose writings and activities exemplify the principle that each of us must act for all of mankind, by developing the “ideal” in one’s self, so that we may bring it out in others, is what is required today to defeat the Empire.

It was with this consciously in the mind, that the San Francisco conference was built. Organizers took, as a starting point, the growing recognition among leading sectors of the population, that action is needed now, and challenged them to understand that what must be done, must spring from the most profound and beautiful conceptions of the nature of man.

This resulted in a thorough-composed and extraordinary event, similar to a classical composition, with the theme throughout being the principles that lay the foundation for the Declaration of Independence and the Preamble to the American Constitution, accentuated by performances of Bach, Mozart and Beethoven throughout [see Art and Mind page].

For readers with knowledge of the English language, we highly recommend to watch the entirety of the event, available HERE.

“The totally over indebted world financial system is so fragile, it could evaporate at any moment, like a supernova. Rather than admitting that their monetarist system of high risk speculation is bankrupt, the financial oligarchy intends to put the burden on the population, through the so called ‘bail-in’ policy! They intend a ‘hair cut’ reduction of the real economy and the living standard with the immediate result the death of millions of people, and they are now openly calling for the return of fascist regimes as in the 1930s.

“We, therefore, commit to mobilize for a national campaign, demanding the U.S. Congress implement Glass-Steagall immediately, exactly as Franklin D. Roosevelt did in 1933.

“We also pledge to revive the principles of the American Constitution and the Declaration of Independence, by initiating, today, a Second American Revolution and committing ourselves to turn America once again into a Beacon of Hope and Temple of Liberty, creating an alliance of perfectly sovereign nation states in the tradition of John Quincy Adams, and establishing the foundation of true peace through development.

“The implementation of Glass-Steagall is the first and indispensable step! Therefore, we call on every citizen to join the movement to establish this law, as well as a new international credit system modeled on Alexander Hamilton’s U.S. credit system, not only for the U.S., but for the whole world, so that that whole world can again become livable.”