About my qualifications: I have introduced relatively few forecasts of critical events during my 40-odd years as an economist (not counting my repetitions of some of those warnings). To date, every forecast which I have made on the basis of my LaRouche-Riemann method has been confirmed by timely developments. I now present a summary listing of those forecasts, for the purpose of identifying my authority for designing the indicated test of economic sanity.

1) During late autumn 1956, in connection with a marketing study, I forecast the imminence of a major U.S. economic recession, triggered by the over-stretching of a post-1954 credit-bubble centered in financing of automobiles, housing, and analogous consumer goods. This recession broke out in February 1957 statistics, and was generally, if reluctantly acknowledged to have occurred several months later. The recession-spiral lasted into mid-1958, and was followed by a prolonged stagnation until an upturn appeared under the Kennedy administration.

2) During 1959-60, I made my first long-range forecast: that near or shortly after the middle of the 1960s, we would see the first of a series of major monetary disturbances, leading toward a collapse of the existing Bretton Woods agreements. I forecast that this collapse would see increased looting of what were then termed developing sector nations, and that the breakup of the Bretton Woods agreements would lead rapidly to austerity measures modelled upon those of fascist regimes, in international economic relations and in the U.S. domestic economy.

All of my economics forecasting and related activities of the 1960s, through spring 1971, were premised upon that same judgment. The first of the series of major monetary disturbances of the period occurred with the collapse of the British pound during November 1967, followed by the dollar crisis of January-March 1968. The break-up of the Bretton Woods agreements occurred beginning Aug. 15, 1971, and was consolidated by the Azores monetary conference of 1972. In immediate response to the August 1971 development, the U.S. government instituted the radical austerity measures known as Phase I and Phase II.

3) In November 1979, during my campaign for the Democratic Party’s presidential nomination, I warned that the measures which the Carter administration and Federal Reserve had just taken, at the urging of newly appointed Federal Reserve Chairman Paul A. Volcker, would lead to the outbreak of a devastating recession, beginning early 1980. Every detailing of that forecast by EIR magazine’s quarterly projections through 1983 was the most accurate forecast issued publicly by any agency; in fact, most, including Chase, Wharton, Evans, and Data Resources, were absurd in their sensing of the direction of the trends.

4) In February 1983, in the course of an exploratory back-channel discussion I was conducting with Moscow in coordination with the Reagan administration, I informed the Soviet government, that if it were to reject what later became known as the Strategic Defense Initiative of March 23, 1983, the strains on the Comecon economy would lead to a collapse of that economic system in about five years. This forecast was repeated in an EIR Special Report, Global Showdown, issued July 1985. The collapse occurred during the second half of 1989.

5) In spring 1984, in my renewed campaign for the Democratic Party’s presidential nomination, I warned, in a nationwide half-hour TV address, and elsewhere, of the outbreak of a collapse in a large section of the U.S. banking system: the savings and loan and related sectors.

6) In May 1987, I forecast, as published in EIR magazine and elsewhere, the outbreak of a major collapse in the stock market beginning approximately Oct. 10, 1987. This was my first and only stock-market forecast.

7) During my renewed Democratic candidacy of 1988, in a nationwide half-hour TV address, I described the “bouncing ball” phenomenon as the key to following the continuing collapse of the U.S. economy through the course of apparent, short-term fluctuations relatively up or down. That has continued to the present day.

8) During my renewed Democratic candidacy of 1992, I warned that we were already gripped by a global financial mudslide, “down, down, down.”

This is a record of nearly 40 years, a record which cannot be even approached on the public record by any currently living economist, even by France’s (and Le Figaro’s) eminently sane Nobel Prize-winning Maurice Allais.

Out of that same unequalled competence, I say to you now, as I informed various relevant scientific institutions of Russia during the last week of this April past:

“The presently existing global financial and monetary system will disintegrate during the near term. The collapse might occur this spring, or summer, or next autumn; it could come next year; it will almost certainly occur during President William Clinton’s first term in office; it will occur soon. That collapse into disintegration is inevitable, because it could not be stopped now by anything but the politically improbable decision by leading governments to put the relevant financial and monetary institutions into bankruptcy reorganization.”

That is LaRouche forecast No. 9—the addition to the list of eight, above.

From 1994 to today: The System Disintegrates

No more than a year after LaRouche’s Ninth Forecast, the financial markets began to reflect the bankruptcy-breakdown crisis that he had forecast.

The spring of 1995 brought the outbreak of a series of “derivatives” crisis, the most notable being the bankruptcy, and takeover, of the two-centuries old Barings Bank. At the end of 1995 LaRouche released his Triple Curve, heuristically depicting the typical collapse function, which described what was occurring in the world economy from 1971 forward. 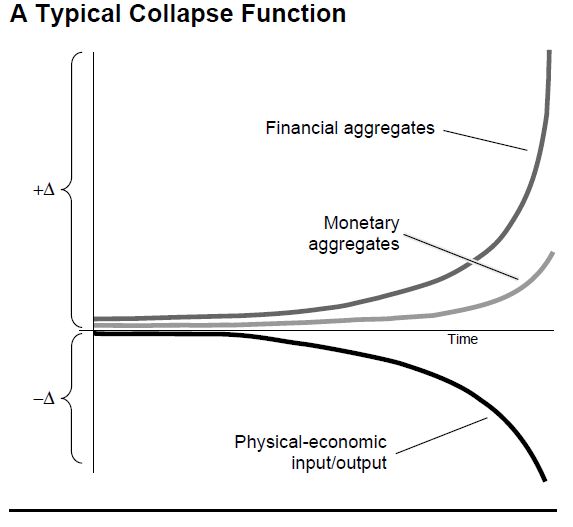 In February 1997, LaRouche and his wife, Helga Zepp-LaRouche, issued a formal call for the convening of a New Bretton Woods conference. Soon after, the so-called Asia crisis of 1997, erupted, and rapidly turned into near-liquidation of the world financial crisis in August of 1998. The August crisis began with the Russian state bond market (the GKOs), and expanded through a world-wide cascade of hedge-fund bankruptcies, the most famous being the bankruptcy of the Long-Term Capital Management (LTCM). The LTCM crisis shocked the political and financial world, and the Clinton Administration would state the necessity for a “new financial architecture”. In the summer of 1999, IMF head Camdessus publicly admitted, that the world financial system had come within a hair’s breath of completely freezing up during the August-September period. This was precisely the vaporization of the system, which LaRouche had projected in his “Ninth Forecast”, to occur, likely before the end of President Clinton’s second term.

In the fall of 1998, and through March 2000, the international central bankers launched a “wall of money” policy, to attempt to print money fast enough to prevent the surfacing of the underlying financial debacle. In this period a bubble was created by a massive infusion of funds into the Y2K scare, and LaRouche updated his Triple Curve to show, how the rate of emission of monetary aggregates were overcoming that of financial aggregates. He called this: “The collapse reaches a critical point of instability.” 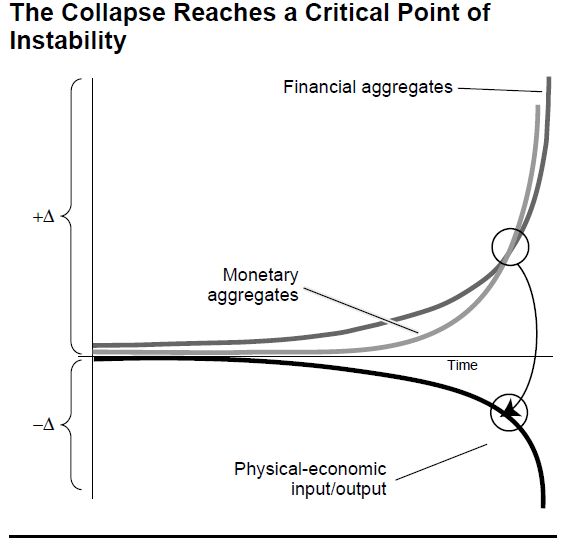 From the pumping of these funds came the so-called housing bubble, which extraordinary growth, fed by Greenspan’s low-interest rate policy, took the bubble to new heights of insanity. The housing bubble began to collapse in 2007, as a reflection of the blowout of the banking system as a whole. By July 2007, the process led LaRouche to conclude, that the system was finished.