These remarks were presented by Lyndon LaRouche, and translated into Chinese, for a conference titled, “Forum on the US-China Relationship and the Peaceful Reunification of China,” sponsored by the Institute of Sino-Strategic Studies, in Los Angeles on Nov. 24, 2007. 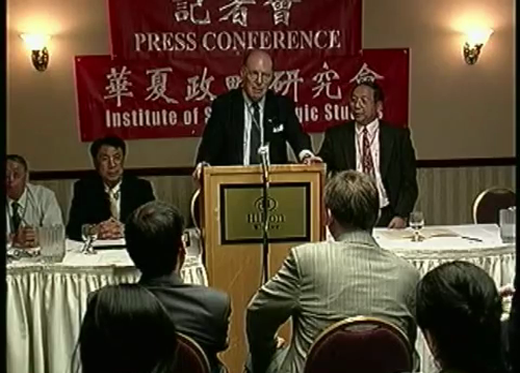 As I reported in an international webcast, broadcast from Washington, D.C. on July 25th this year, the present world monetary-financial system has entered the most deadly crisis of recent centuries. At that time, I emphasized two things about that forecast: that the end of the present world monetary-financial system were inevitable, unless that system were replaced by a new world system during a relatively brief, remaining time available.

Since that time, evidence bearing on all relevant leading developments from around the world, has confirmed the essential accuracy of my July 25th forecast on all relevant points. Since that time, nothing visible has actually been done by any government to change the present world system in ways which would tend to solve this crisis. For example, every action taken, since that date, by the U.S. Federal government and the U.S. Federal Reserve System, has been an intrinsically tragic mistake. So far, every reaction of the governments of the U.S.A., and of western and central Europe, in particular, to deal with their crisis, has been worse than a failure. The crisis has an inherently hyperinflationary form which should remind us of developments like those of 1923 Weimar Germany, but, this time, on a world scale.

When we take into account the knowledge which we have available to us today, the following rule applies: whenever a powerful combination of national governments can arrive at a suitable agreement to change a failed financial-monetary system, a solution for any modern financial crisis can be found. Therefore, my leading point in this report today, is that: Specifically, were the government of the U.S.A. to propose cooperation on a suitable reform, to an initial sponsoring group made up of the governments of the U.S.A., Russia, China, and India, it would be possible to bring the present international crisis under control, and, therefore, to rally a majority of the world’s nations to join in measures which would stabilize the world system, and provide the foundation for a general economic recovery.

The last general recovery of the economy of the U.S.A. and western and central Europe, was initiated within the United States under President Franklin Roosevelt. The death of President Roosevelt was a great loss to humanity; but, despite his death, although the policy-changes made under his successor were, generally, a big mistake, the U.S.A. economy continued to prosper under the continued benefit of the then deceased President Roosevelt’s policies until the assassination of President John F. Kennedy on November 22, 1963 (despite the bad policies introduced under President Truman).

The effects of the 1964 U.S. entry into the long war in Indo-China, like the more recent, very foolish wars which were launched by the Tony Blair and George W. Bush governments of the United Kingdom and the U.S.A., have led, successively, into the wrecking of the international monetary system in August 1971, and a general physical-economic decline in the economies of Europe and the Americas. This decline over, approximately, the 1968-2007 interval, has led into the consistently worsening physical-economic situation in those nations up to the present time.

The decline in those economies of Europe and the Americas, has had many contributing causes, but it was chiefly the result of the introduction, beginning 1971-1972, of a presently continuing, ruinous, pro-Malthusian type of global floating-exchange-rate monetary system. Despite some important trends for improvements in some leading national economies in Asia, the per-capita level of net physical-economic strength in the world as a whole has collapsed.

Thus, despite the improvements for a significant portion of the total economy in some leading nations of Asia, the deficit in development for the largest fraction of the populations is critical, at the same time that the productive powers of labor in western and central Europe, and in North America, continue to collapse catastrophically. Therefore, the needed development in even progressive economies in Asia, requires a mobilization of the physical capital and technology needed to raise the level of basic economic infrastructure and physical productivity throughout Asia and Africa, and also in the dangerously decadent, present form of the national economies of western and central Europe and of the Americas.

The most crucial among the urgently required actions to be taken jointly a group of nations led by the U.S.A., Russia, China, and India, are the following.

1. The present world monetary-financial system must be placed in a prevalent, juridical status of reorganization in bankruptcy.

This means that: As provided by the U.S.A.’s Federal Constitution, all central banking heretofore independent of sovereign governments, are placed under the sovereign powers of the relevant constitutional government.

This means that: The government, through an institution equivalent in authority to the constitutional design for a Federal Treasury Department elaborated by U.S. Treasury Secretary Alexander Hamilton, will assure that: under rules for reorganization in bankruptcy, those payments authorized either specifically or categorically by the Federal authority will be treated in a normal fashion, as prior to placing the old monetary-financial system into receivership, but subject to supervision in the matter of regulating the retirement of outstanding capital-financial obligations.

The included objective of these reforms of a system in bankruptcy, is to maintain, and to elevate the level of existing essential levels of employment, payment of ordinary pensions, and so forth, and production of essential goods and services, this with a view to accelerating rates of growth of net physical output, per-capita, and per-square-kilometer productivity of the economy.

2. The physical-economic recovery and net growth of these economies, per capita and per square kilometer of total territory, requires an emphasis on the application of physical improvements in basic economic infrastructure, and the use of capital-intensive investments in basic economic infrastructure as the physical-economic driver for the other forms of production in the economy.

In other words, the needed reforms must be premised on the equivalent of a pervasive science-driver policy for the economies and territories as a whole.

The possibility of success for such required programs, depends to a very large degree on two global considerations, considerations which bear on each part of the world, and the world’s necessary development viewed as a whole. 1.) The first, is development and refinement of raw materials supplies. 2.) The second, is science as defined in terms of fundamental, universal physical principles. The two are functionally inseparable: there can not be sustained development of needed raw materials supplies without emphasis in fundamental physical-scientific progress measurable in terms of characteristic energy-flux density of modes of production.

The realization of those crucial objectives demands a clearly defined shift from what has been, hitherto, the strategic advantage of maritime powers over the quality of power of continental interiors. For most of a period reaching as far back into the times prior to the last glaciation in the northern regions of the northern hemisphere, ocean-going and related development of maritime power has been economically and strategically at a great advantage over the economies of inland habitations. This began to be changed with the so-called “geopolitical” implications of the appearance of the transcontinental railways of the U.S.A. Since that time, the related clash of maritime powers, such as those of the British Empire, with the nations and peoples of continental Eurasia and the U.S.A. had been dominated, strategically, by the challenge to this domination, which had been represented the by victory of President Abraham Lincoln’s U.S.A. That victory had been the root of the reaction against the U.S. success, a reaction reflected as Prince of Wales Edward Albert’s launching of the 1895-1945 war of Japan against China, and by those related imperialist wars of the 1905-1945 interval, which illustrate the challenge which continues in either similar or relevant other expressions still today.

As in the case of China, the elevation of the conditions of life of the entire population of China (and, also, relevant other nations), demands a scientifically very advanced approach to development of raw materials supplies in presently poorly developed northern Eurasian territories. Improvements of management of water supplies throughout Eurasia, extended and qualitatively improved forms of global (e.g., transcontinental/intercontinental) transport systems, and “crash program” qualities of emphasis of both power supplies and production technologies based upon nuclear-fission and thermonuclear-fusion modalities, are now indispensable. This urgently needed transformation of policies within the Eurasian territories and beyond, is beyond the present resources of Asian nations by themselves. Western and central Europe, for example, must be mobilized to earn their livelihoods by producing an immense volume of physical products of very advanced technologies as supplements needed for the appetites of the densely populated regions of Asia.

For example, the potential for such developments is illustrated by the present implications of the reopening of the rail-systems leading from Korea as a whole, into China and Russia. The implicit common physical-economic interest of Japan, Korea, China, and Russia (among others) in this opening up of systems in North and East Asia, are to be regarded as one of the presently great opportunities for the benefit of humanity.

– The Obstacle to Sanity –

Today, the world as a whole is menaced by a kind of threat to the continued existence of civilization, which is to be remembered from what became known as the “New Dark Age” of Europe’s mid-Fourteenth Century. Then, as in places such as Southwest Asia now, civilization is destroying itself through the predatory actions of a reigning social class of predatory financiers, financiers, like those of the Lombard bankers of the Fourteenth Century, who used the financial profits taken from the financing of wars, as in Southwest Asia now, as a mode of financier life.

These predatory descendants of the Venetian financier tradition of Europe’s so-called “Middle Ages,” have created vast amounts of accumulated purely fictitious financial gains from predatory speculation. These accumulations have reached levels at which the entire financial bubble created in this mode is now collapsing in a way which mimics the experience of Weimar Germany during the latter half of 1923.

These financier interests, are not merely predatory, but have entrenched themselves as a powerful, controlling interest over the governments and leading political parties of leading nations. As a result, there is presently, an existential clash of the appetites of that class of predatory financier interest with the most vital interests of not only the majority of the population within nations, such as the U.S.A., but the very continued existence of anything resembling a reasonable order throughout our planet.

That medieval legacy of predatory power of usury has gained such power that it can not be defeated except through a concert of clearly defined, mutual self-interest among a combination of powerful nation-states.